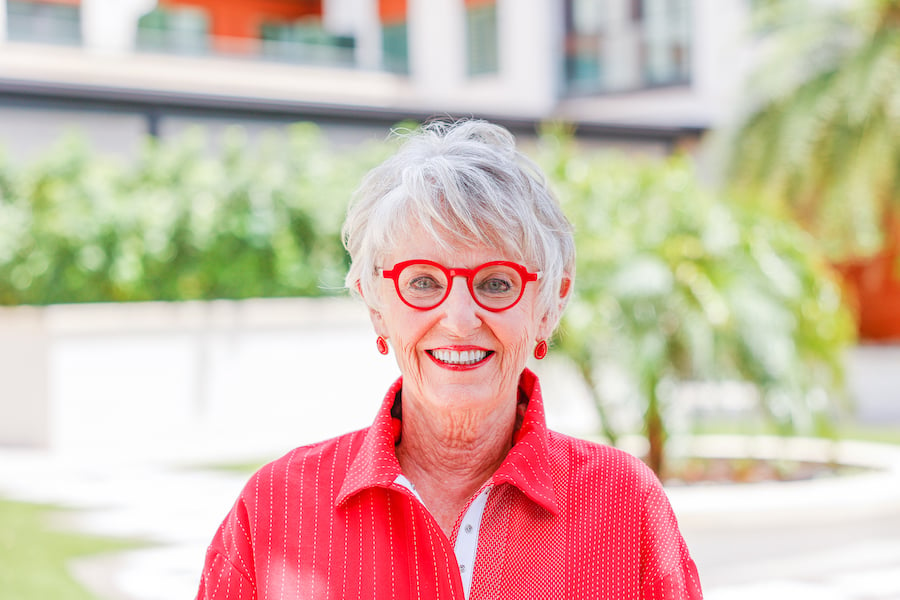 For many, a happy and fulfilled life for means connection, community, and making change. For Christine Dickemper, early on, she had made these values pillars of her life. During her career, working hard was her specialty – and even today – as a Moorings Park at Grey Oaks resident, she still manages to make her mark.

Dickemper, a Chicago native, graduated from Saint Mary’s College Notre Dame, earning a double bachelor’s degree in Fine Arts and Art History, with a minor in Education. She taught high school art for three years post-graduation before taking time off to raise her son. Never afraid of making a change, Dickemper’s roles changed but were all quite impressive, to say the least. Her titles at not-for-profit organizations included a researcher/lobbyist for the Tax Department of the Indiana Chamber of Commerce, the Assistant Director of the Public Service Division at Indiana University-School of Public and Environmental Affairs, and the Executive Director of the Allen County Indiana Federal Economic Opportunity Council.

Research That Pays Off - Community

When in St. Louis, Christine met her now-husband, Bob. While in their 50s, the couple witnessed both sets of their parents refuse to leave their homes as they aged. Christine and Bob, while wanting independence in their senior years, were committed to relieving their children of the caretaker roles. Accordingly, they began researching continuing care retirement communities.

Over seven years, they visited over 22 communities all over the country. At the time, they were living in Texas and looked at communities mostly on the east coast, including South and North Carolina, and in Colorado.

“When in South Carolina, where our oldest son lives, he said ‘Any of us [children] would love to have you live near us. But you can’t be certain if any of us will remain where we presently live, so pick a location you like and where you know your children and grandchildren will enjoy visiting.’”

Shortly thereafter, the Dickempers visited Bob’s sister who winters in Naples. During that trip, the couple visited Moorings Park; Moorings Park at Grey Oaks was only in early development.

“I can honestly say that when we landed at Moorings Park, there was no comparison to what we had seen elsewhere. My research brought up the affiliation with John Hopkins and the creation of The Center for Healthy Living®, along with a concierge physician practice - all of which were unique and intriguing.”

Very shortly thereafter, they put a deposit on a residence in Moorings Park at Grey Oaks before construction started. Two years later, the Dickempers were the third residents to move into the resort-like campus.

“It was idyllic because everyone at Moorings Park at Grey Oaks moved in within the first six months of opening, making for a very tight-knit group of residents.”

They all experienced the beauty of the new Naples Life Plan Community together.

“Moorings Park at Grey Oaks has a unique culture. We’re small, so everyone knows each other. We all went through the initial transition together, and over the last six years, we have aged together and support one another as we move through the aging process.”

The six-and-a-half-year resident admits she’s always been involved, whether at her work or in her neighborhood, such as the HOA.

Soon after moving into the Life Plan Community, she was a part of the Employee Recognition Holiday Fund for Moorings Park at Grey Oaks. After that, she became the President of the Residents Council. While the campus was young, she worked on developing a team of residents who would serve on the council’s various departments.

Today, Bob and Christine Dickemper continue to learn and grow together at Moorings Park at Grey Oaks, enjoying the community’s organized outings and activities, and all the art and culture Naples has to offer.

“It was important for us to move in while we were still able to enjoy what the community and Naples have to offer – amenities and all. We’re very happy. Our location is fantastic. It’s definitely home.”

What’s her weekly schedule? You can find her all over campus.

“I frequent at least four to five different fitness classes offered by the wellness staff. I play Mahjongg, Bridge, and Backgammon. I participate in the Moorings Park at Grey Oaks Book Club and facilitate the weekly discussions of the Spiritual Book Club.” She even attends weekly art classes and volunteers at Mangrove - Moorings Park at Grey Oaks’ memory care center - helping residents create art projects.

“Additionally, I serve on the board of a Naples organization called Fresh Start for Survivors of Domestic Violence. I also serve on our church’s annual fundraising committee, for funds that are donated to community organizations by our church grants committee.”

There is no doubt that community is of utmost importance to her.

As if all the above doesn’t keep her busy enough, Dickemper facilitates the campus’ weekly women’s coffee discussions, providing management with any questions or concerns that arise.

She notes that she and her husband deeply enjoy dining with their neighbors, keeping a running list of those they wish to invite to dinner. She also emphasizes that there are many opportunities to engage socially with others and that dining with a wide range of neighbors is just one wonderful part of the campus’ culture.

"We are a small community; most residents know one another and enjoy mixing, mingling, and embracing new residents into our Grey Oaks family.”

As for pure hobby enjoyment, Dickemper loves art. Remember her college majors? The couple collects art, primarily purchasing works by young artists in the area, admitting that part of the beauty is watching their art mature and grow in popularity.

What would she like to continue to learn in her retirement? Her favorite art forms, of course: Zentangle and weaving.

“I’d also like to improve my Backgammon game, so I can beat more frequently the men I play, including my husband, whom I taught how to play!”