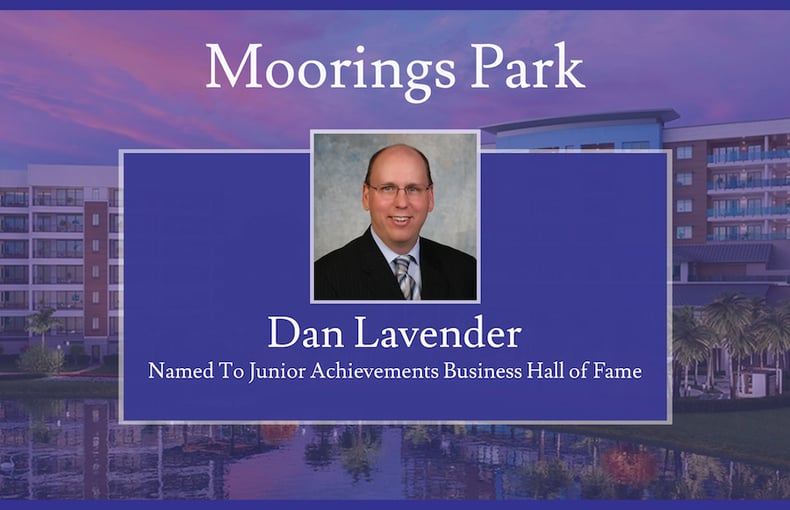 Junior Achievement of Southwest Florida has just announced Dan Lavender, President and CEO of Moorings Park Institute, Inc., will be inducted into its 2019 Business Hall of Fame, Collier County, on October 24th.

The prestigious award recognizes outstanding entrepreneurs who serve as role models for youth through their professional accomplishments and commitment to community. Lavender will join a distinguished group of individuals who have been inducted into the Business Hall of Fame since it was founded in 1988.

An Ohio native, Lavender earned a Masters Degree in Business Administration from Ohio University in Athens, Ohio, and a Bachelor of Arts in Accounting and Economics from Bluffton College, in Bluffton, Ohio.

Since the beginning of his career, Lavender has spent the majority of his time serving seniors. In his earlier years, Lavender was Chief Financial Officer for Methodist ElderCare Services in Columbus, Ohio, helping to guide it through a period of strategic growth and improving financial performance. He also played a leadership role at Ohio Presbyterian Retirement Services, one of the 15 largest multi-site, non-profit senior living organizations in the country.

Lavender started his career at Moorings Park in 2006 and was named CEO of Moorings Park Institute, Inc., in October 2009. Under his guidance, Moorings Park has enjoyed the reputation of being one of the most successful, highly rated and progressive senior communities in the nation. Lavender’s philosophy is to have each resident live longer, happier, and healthier lives through its various successful aging programs and lifestyle amenities.

Lavender is joined in this honor with Bud Hornbeck, area chairman of Arthur J. Gallagher, Co. in Naples.