Surely in your lifetime, you’ve contemplated when asked if you would go skydiving. Whether the answer is a definite “Yes, of course!” or a soft “Hm, maybe…” one never really knows if they’d have the courage to follow through until they are propped at the edge of the airplane’s door. When it came down to it, would you actually jump to the ground from 14,000 feet above Earth? Well, that’s what five fearless Moorings Park residents did just two short months ago.

Residents Jim Nolan, Bob Hartsock, Dean Patenaude, Peter Gough and Dennis Lily all jumped out of an airplane at Skydive Spaceland Florida in Clewiston. This unique adventure is part of the Life Plan Community’s Wanderlust Program.

The men’s excitement beforehand was surely admirable as fear took the back seat. “[I’m] anticipating a great day, not really nervous. This is a first!” said Hartsock.

What is the Wanderlust Program?

The Wanderlust Program, developed by Moorings Park’s Wellness team, is a curated collection of unique and evolving experiences designed to encourage residents to keep setting goals for themselves by seeking out new immersive adventures.

“Whether it’s an Everglades airboat excursion, a local 5K, skydiving, or driving a supercar on a world-class racetrack, this amazing collection of experiences reminds us all that age is just a number,” says Moorings Park’s Director of Wellness, Robert Sorenson.

In fact, residents have already taken part in most of the above. Immersive experiences like these not only provide opportunities for residents to pursue something new and different, but they also create a shared camaraderie and meaningful connections with other like-minded residents and Moorings Park employees. Engaging in new and exciting experiences, building social connections, and intergenerational relationships all contribute to living a longer, healthier, and more vibrant life.

“Just because you’re in a certain age group demographic shouldn’t mean that you should stop setting goals or doing what you can to move forward and achieve them,” adds Sorenson.

From prepping mentally to suiting up for the big jump, anticipation built up by the time participants loaded onto the plane. Though, one could say the thrill is the whole point of skydiving. 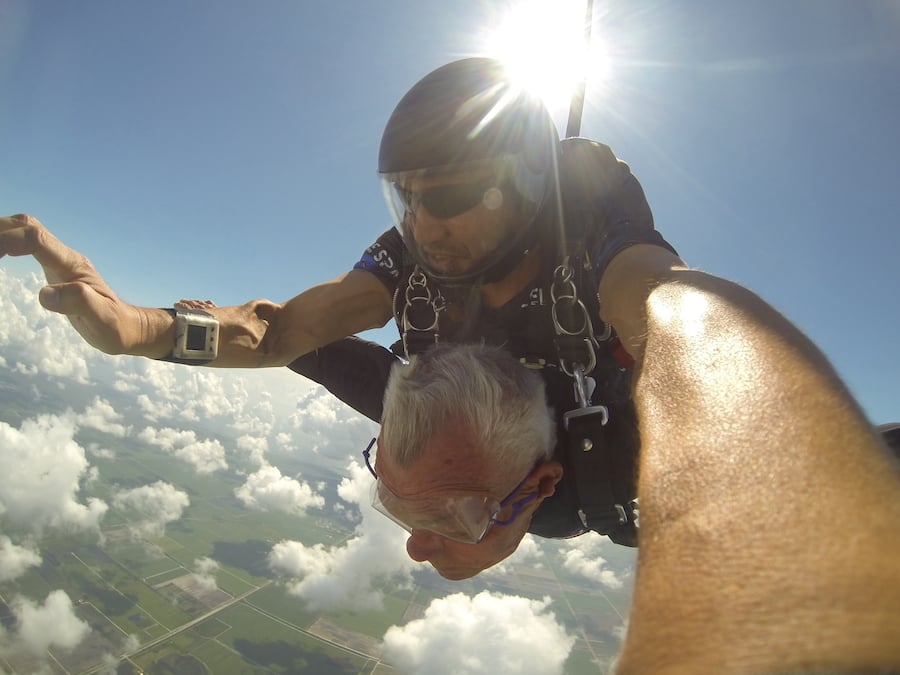 “It happens so quickly. You’re looking around quickly, and then you turn upside down. You roll upside down, and then you roll over again. You know, the clouds are above you. And it just is crazy,” Gough told WINK News. He was in the Air Force, so he had some training under his belt, but this was his first time jumping, like the rest of the crew.

Patenaude thinks that his willingness to do such an adventurous activity says a lot about himself and his desire to live a full life, even in his retirement.

The five friends and neighbors all shared the experience of jumping out of an airplane and freefalling to the ground. Not many folks can say that about their aging process, to which they all embrace with positivity and exploration.

Partners and Residents Bonding On and Above Earth

Moorings Park partners were also able to jump in on the action, for which they were very grateful. Moorings Park’s Associate Executive Director, Kayla Crawford, attended the outing.

“I can honestly say it was one of the most amazing experiences to share with [our residents.] They were so excited about a new activity that would push their boundaries for what was possible, so much so that we are already planning a second trip!

“As for myself, I was excited but nervous; never having skydived before, I wasn’t sure what to expect. It was comforting to have others to share that feeling with.”

Residents enjoyed themselves so much that Patenaude jumped for a second time, while others committed to returning with a second group. “I signed up for my next jump the same day with plans to seek formal certification, it truly was the experience of a lifetime,” says Crawford.

Onto The Next Adventure

Back in March, a group shared an adventurous (and beautiful!) experience touring through the Everglades National Park on an airboat ride. And, in May, members participated in the Naples Tropicool 5K.

“The Tropicool 5K was, for me, a unique experience. There's something really ‘cool’ about participating in a community-wide ‘race’ at age 93! Of course, I decided that taking a brisk 3-mile walk was far wiser than trying to keep up with those youngsters who knock off each mile in about six minutes. It took me twenty,” says Moorings Park resident Phil Alden. “I got to the end after 66 minutes, feeling fine and in good health.

“Our little group of adventurers from Moorings Park enjoyed the luxury of being conveyed to and from the racecourse by Motorcoach. Robert Sorenson and his Wellness team kept an eagle eye on us and cheered us on. We'll do it again!”

With the Wanderlust Program’s deep success and buzzing excitement around campus, more excursions are on the rise. Sorenson is planning a second skydive experience since he has received so much interest after the first group went. In fact, already 14 residents have signed up for this excursion. And, come the fall, residents will be driving supercars on a world-class racetrack.

“This program was really the brainchild of a drive to further innovative thinking at all levels in our community. The program was conceptualized to be able to scale and grow to enable all who wanted to, to be able to participate regardless of age or abilities. To date, it has been a great success and I’m excited for the future opportunities to come,” says Crawford.