The Right Move at the Right Time “We never planned on getting old,” joked Joy Hartsock to her husband, Bob. But the Naples couple knew that a move into a Life Plan Community that offered the resort lifestyle they desired, along with the healthcare they might one day need, was a smart move. They chose Moorings Park.

“The house was a lot to take care of because we traveled so much. We were always worried something was going to go wrong while we were away,” she said. “Bob had been retired for five years, so that’s when we began looking into retirement communities.”

Originally living in their home in Pelican Bay, Bob and Joy knew that Moorings Park would be their choice for many years before finally pulling the trigger. “We looked at the Garden Residences, but we wanted to make friends and got a tip that a great way to meet people is in the Tower elevators,” said Bob. “You’ll run into someone new and soon they’re asking you what you’re doing for dinner next week. The building is highly convenient and highly social. We liked that.”

“We made friends the first week we were here,” added Joy. “There’s a tradition here where a couple who have been living in Moorings Park invites three new couples into their home for cocktails. We went to five or six parties a week in various buildings. It was a perfect way to meet new friends.”

Socialites Bob and Joy love their Tower residence for its friendly atmosphere, as well as their home itself, but Bob also makes frequent use of the Har-Tru tennis courts conveniently located just outside their residence, both to meet new friends and stay active.

“I used to play golf, but I decided it was time to do something different,” said Bob. “We had friends who were active in tennis because it’s conveniently located and takes a lot less time to play.” 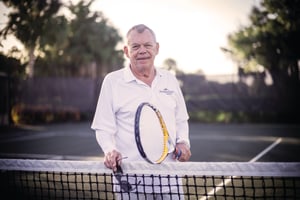 Playing with a group of three competitive tennis players on Saturdays, Bob notes that he enjoys playing tennis because of the exercise it affords him. “At our age, it’s important to stay active. Some people say tennis adds a number of years to your life,” he noted.

Bob also utilizes The Center for Healthy Living with its concierge physicians and personalized healthcare programs, as well as the fitness area. “There’s so much equipment and so many fitness classes available. You just can’t beat it,” he said.

Beyond playing tennis and attending dinner parties, the Hartsocks take advantage of all Moorings Park has to offer. “We used to get together with 60-70 people to play cards at Orchid Terrace and would dine out almost every evening with another couple or two,” said Joy. “On Saturdays, people get together to play chess and bridge. Mahjong is still going strong. There are so many activities to be a part of. We’re looking forward to it all coming back.”

“Even back in 2011 when Moorings Park was still completing construction on its amenities, the community was head and shoulders above all other communities,” said Joy.

The Hartsocks are just two of the Towers’ residents benefitting from the recent renovations on the two buildings, which were completed this year. New materials and architectural elements enhanced the buildings’ visual allure as did the newly installed lush landscaping. Expanded windows, complete with power solar shades, provide those who live here with enhanced campus views.

Close to Everything and Everyone

Bob added, “You can’t beat the convenient location Moorings Park has to downtown Naples and its shopping and dining. Other places we looked at are too far away and with the traffic in season, it’s too much. This isn’t the case with Moorings Park.”

“Hopefully you’re here a long time to make a lot of friends and have a great time,” concluded Joy. “Just like we did.”

Luxurious residences at Moorings Park are nestled in a park-like setting on our 83-acre campus and range in size from charming one-bedroom apartments of 882 square feet to expansive residences of more than 5,000 square feet. For more information on the move-in-ready homes, call 239-643-9111 or visit the website at MooringsPark.org.