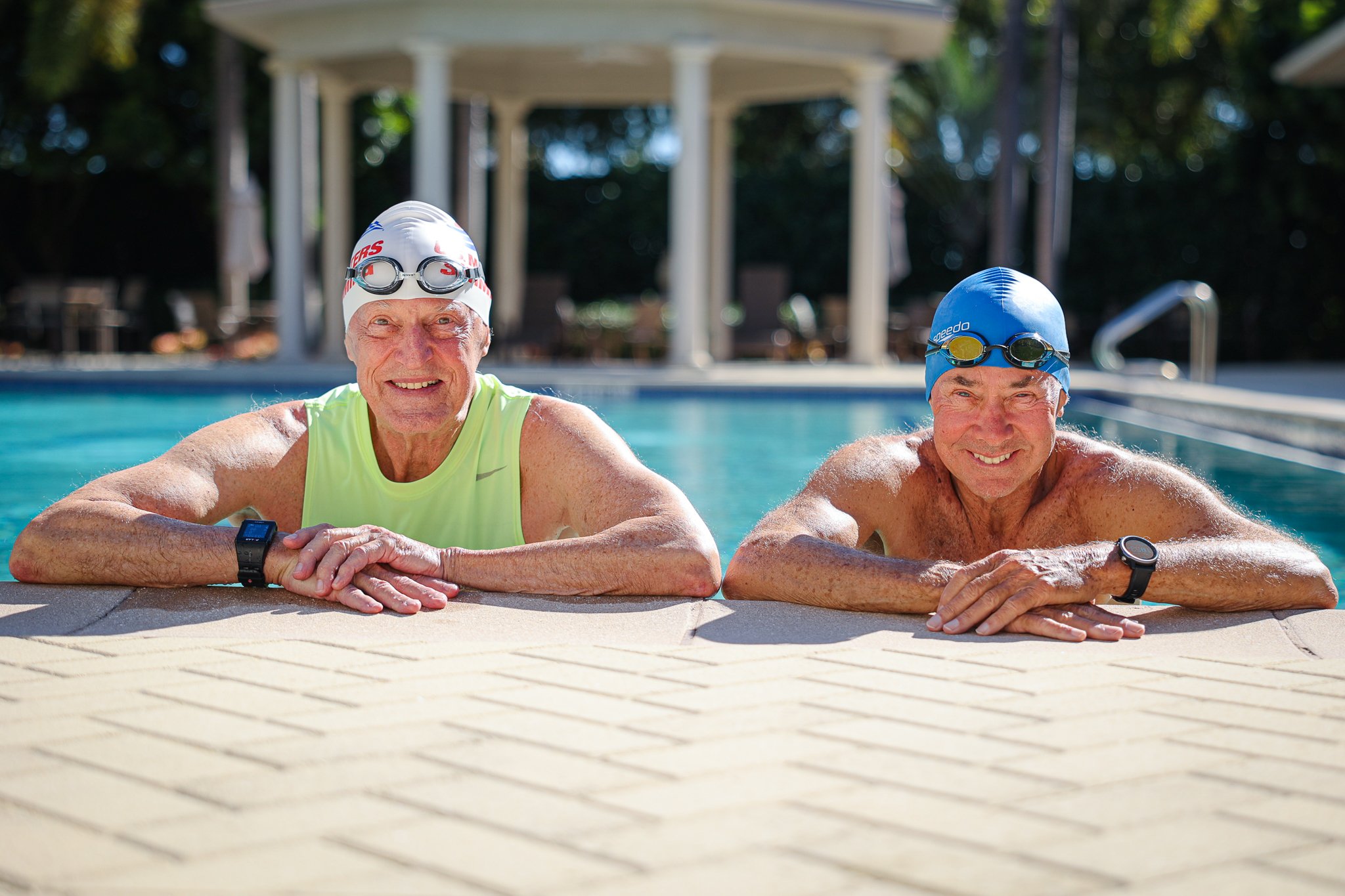 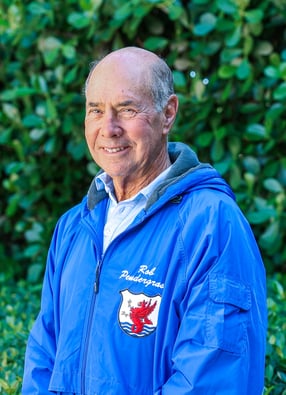 Ever have a casual hobby turn into passion, turn into a competitive sport? That’s what happened with Moorings Park resident, Robert Pendergrass, and swimming. Pendergrass finds himself not only swimming, but swimming in competitive meets multiple times a year.

The five-year Moorings Park member says he’s always been a swimmer, even in his high school and Cornell University days. Breaststroke was his technique of choice, though he laughs that after college, he never swam that particular style. Instead, freestyle was his go-to.

“It was always just to stay in shape.”

He admits that after college, he didn’t swim competitively for over 50 years. The sport was simply a means to stay healthy and fit. However, everything changed when after moving into Moorings Park, he met Karl Wiedamann, a fellow community member and active competitive swimmer. After forming a friendship, the two began swimming breaststroke together.

“I could see I could keep up with him, so I said ‘Okay, I’m going to start swimming competitively again.’” At the end of 2018, he joined his first meet. “I didn’t do very well.”

However, that just motivated him more. Through sporadic coaching and a cavernous amount of independent practice, Pendergrass progressed.

“Basically, I’ve been self-coached. I read a lot about [swimming]. I’ve always worked out and always swam,” Pendergrass says, noting he works hard at improving every day.

Nearly once every three months, he competes. These specific Florida events vary location; Sarasota, Orlando and Fort Lauderdale are various cities the Cornell alum has traveled to.

As far as the analytics of it all, Pendergrass wears a Garmin fenix sports watch that tracks his movements, workouts, heart rate, sleep patterns, and more. In terms of swimming, it counts laps and distance, which he finds incredibly useful.

Every other day, Pendergrass swims hard, meaning anywhere from 15 minutes to an hour and a half. He then takes a rest day, which may include a simple dip in the pool or a round of golf (despite his previous coach’s thoughts of golfing interfering with swim time.)

“He didn’t like me golfing at all. In any case, that didn’t work out,” he laughs. “Though, my workout philosophy is still doing a 'hard' day, then taking a day off.”

A healthy diet is undoubtedly important for any athlete, but it’s not much of a concern for Pendergrass. He admits he’s always been a healthy eater, so his diet hasn’t required much change. Though, energy levels do require lots of fish and protein. Additionally, he strives to get eight hours of sleep each night. Like we all know, that’s most times easier said than done.

His most recent goal is to compete in freestyle distance races. While he strives to beat his competitors – which he does in fact do, placing second in the country in previous races – he also notes that he does it merely to keep healthy. It’s a competition with himself to always do better than his last time. Though, who doesn’t enjoy some friendly competition? 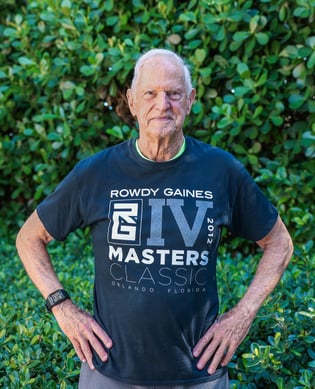 Nine-year Moorings Park member and friend to Pendergrass, Karl Wiedamann, who also swam in his high school and University of Florida days, took a 35-year break from swimming. Though, what made him revisit the water? He admits that at the time of retiring in 1994, he could barely walk two flights of stairs without being out of breath.

This led him to work out via his bicycle, acknowledging that back in his teenage years he was a three-time Florida state cycling champion. A year after he began his bike workouts, he heard of the Senior Olympics and spontaneously signed up for the 50-meter breaststroke. After warming his body up for the event, it was race time.

“I got within ten yards to the end of the pool and race, and all of a sudden, it was like swimming through molasses,” says Wiedamann, confessing his body was struggling. “Though, once I finished, everyone got excited. I had set a new record for my age group.

“I thought ‘If I could do that without any training, what can I do if I start to focus?’” Thus, he was inspired and became serious about swimming again.

After a few years packed with practice and success in various swim meets, Wiedamann was asked to train in the Olympic training center for a week. He was one of 20 Masters swimmers invited. As expected, this got him even more motivated.

Within a year, in 2003, he was getting coached by a professional. In 2006, Wiedamann went to the World Masters Championships and, in his words, did “okay.”

“I wasn’t satisfied,” he admits. Though, 18 months later he found himself in Perth, Australia for another Masters Championship. “I had a very good week,” he smiles.

“To my knowledge, I’m the only male in masters swimming to have set world records in all three distances of breaststroke.”

Impressive doesn’t begin to describe his accomplishments. Though, the years that followed brought a variety of health complications, which was inevitably a setback for him in terms of swimming; he had lost 15 pounds of muscle.

Then, in 2020, Wiedamann started to train again. “Now, I’m in a rebuilding phase. It’s coming along; I realize the technique is still there, I’m just working on the power.”

In terms of a diet for this gentleman, he declares his love of wine. Even while he was competing in the World Championship, he drank two glasses every night. Additionally, he tries to cut back on how much he eats at night, but nothing is restricted too much.

Every Monday, Wednesday, Friday and some Saturdays is swimming in terms of a workout. Tuesday and Thursday are strength training days for Wiedamann in The Center for Healthy Living® to increase his heart rate. Currently, he can leg press 400 pounds.

His goals? For now, it’s to get his power back. Though, once he turns 85, he wants to compete in several national championships in the 85-89 age range.

A long-term goal? “It was created for me about five years ago up in Canada at a swim meet. There, a guy set two world records in the 105 to 109 age group,” he says. “I want to break those records.”

Both men inspire each other to do better. After all, Wiedamann was a catalyst for Pendergrass to start swimming competitively.

“He wants to beat me; I know that,” says Wiedamann. “And, if I can help him achieve that and it keeps both him and I motivated, then that’s great.”

Motivate each other, they certainly do. And help each other, too. In 2019, Pendergrass stepped in for Wiedamann in the Rowdy Gaines Masters Classic annual race.

Moorings Park Communities has assisted both gentlemen from excelling in multiple ways through the amenities and staff.

“The pool is tremendous. I kid that it’s my pool because I’m in it so often,” Pendergrass jokes. “I try to do weights also. I’ve worked with Robert [Sorenson]; he’s been absolutely terrific in terms of helping me tend to certain muscles for various strokes.”

VO2 max is the maximum rate of oxygen you can consume during exercise and is especially important for aerobic athletes, such as swimmers. According to WebMD, “your VO2 max shows how well your heart and veins push blood to your muscles and the rest of your body.”

“Mr. Pendergrass’ and Mr. Wiedamann’s physical capacity far exceeds what we typically see in this demographic. They both have essentially re-defined the aging athlete. This is largely attributed to their work ethic in the pool and in the gym, openness to new training methodologies, coachability, and living day-to-day with their body’s best interest in mind,” shares Sorenson. “Each of their competitive drive should serve as a source of inspiration for the young, the old, and anyone who has, or has considered, jumping into competition.”

The Athlete Within You

Regardless of your current physical condition, each of us has the spirit of an athlete lurking within us, ready to sprint if given a chance. Best of all, you don’t need to compete against others to discover this athlete. The key is to find a fitness program that meets you where you currently are. Moorings Park Communities’ Wellness Team can help you with this.

If you are interested in following these swimmers, go to USMS.org, select Events, then Individual Results and enter their names.